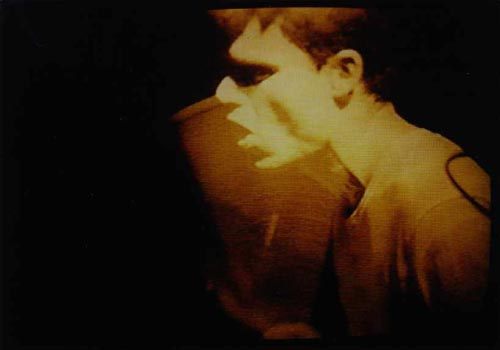 Aural Wes recently posted about the 1999 film Instrument by Wesleyan alum Jem Cohen ’84. I’ve had the soundtrack for years thanks to my much-cooler-than-me wife, and enjoyed it immensely. Except that I didn’t know that there was a film. There are three words on the album cover: Fugazi, Instrument, and Soundtrack… No? Nothing? I suppose I thought that “Instrument Soundtrack” had some kind of inside meaning. This is why I like psychoanalysis so much—an underdeveloped sense of the literal. Now I know. Netflixed it to the top, bumping out Blackadder, at least for now.

Update: I enjoyed this movie so much. Fugazi appear to walk the thinnest line between standing for something and not taking themselves too seriously. We listened to punk all weekend on the stereo after watching Instrument, and every time a Fugazi track came on it was so clear how far above the rest of the pack they stand.

The film is shot in a raw, understated style (on Super-8 film), without exposition. It chronicles ten years in the band’s history, 1987–1998. Occasional lines from Fugazi’s songs, printed on screen at the beginning of some scenes, are the only didactic narrative gestures from Cohen. Ultimately it’s a document of the band, written by someone who knows and loves them.

And here is your money quote. It’s Ian MacKaye talking between songs to an audience member who was being aggressive: