December 17, 2009 / We used to imagine a better Future through architecture. 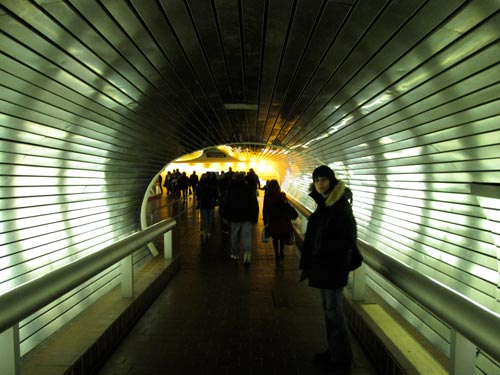 Elena in the tunnel

As we plunge further into crises, of economics, democracy, environment and war, and the future appears less and less about infinite progress, I’m increasingly struck by the ways that we used to imagine the world of today would actually turn out.

View from the Twentieth Century

Take Kubrick’s 2001: A Space Odyssey, page through some science textbooks from the 1950s, walk the passenger tunnels at Union Station in New Haven (pictured here), circle Eero Saarinen’s Ezra Stiles and Morse Colleges, or Paul Rudolph’s brutalist Art and Architecture building on Yale campus, explore Wesleyan’s CFA complex in Middletown, or stroll past the entrance to this hotel on St. Kilda Road in Melbourne.

We used to project where we were headed with Modernity in the way we built the city environment. There’s a dream of a better future, on a different scale, that seeps in as you spend time with these objects, images and places. There is a sense of optimism and the hope of a more cooperative sociality. I’m not sure that we do this anymore. 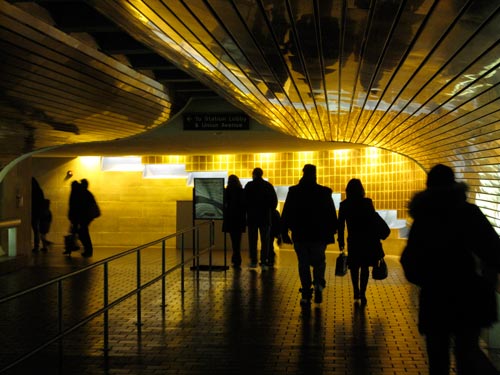 In these ways we used to be more modern. In other ways, it was always a dream, an aspiration that was never achieved. Was it supposed to be? Maybe not. Looking ahead one thing seems certain: the Twentieth Century’s imaginings of Tomorrow will never come to pass, and the future is going to turn out to be a lot different than anyone predicted.

On the other hand, I don’t know from architecture. Never studied it. Of course, when has such a limitation ever prevented me from expressing a strong opinion? Perhaps you disagree…