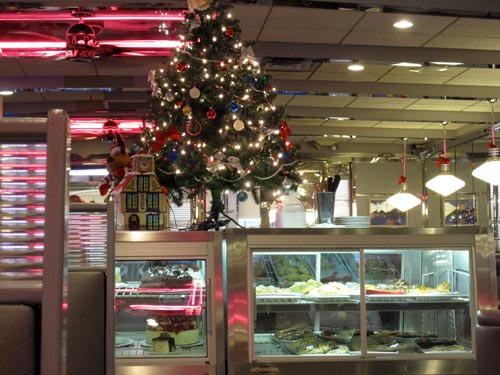 My first trip to an Athenian diner was with Elena a few days after we met. We were both living in New Haven and she had a car so she could drive us there. When I asked her how far away it was she said, and I will never forget it, “it’s farther than you can even imagine.” She was referring to 1426 Whalley Avenue, but late at night in a then-unfamiliar part of the city it could have been anywhere as far as I knew. E just called it Athenian, but I later came to understand that it was Athenian I: the first member of a regional diner quartet.

To an out-of-his-element Australian there’s nothing like the American diner. It’s one of this country’s best and most important institutions. It’s at Athenian that I finally learned how to order food in America. Know how your eggs will be cooked, know your toast options, know your salad dressings, and most importantly, ask for coffee. You only need to ask once and it will keep getting refilled as long as your arse is parked in that booth. This amazing social technology has not reached my homeland, as far as I know.

So imagine my delight when we upped and moved from New Haven to Middletown, only to discover that Athenian II is right here in Our Town. (I had dined at Athenian III in Milford a few times, on Christmas shopping excursions to the mall in years gone by, without ever knowing where II was.) Now I’m sure that others will disagree with me on this, and so be it: New Haven has The Pantry, Middletown has O’Rourke’s, up the road is the excellent Cromwell Diner, but to me the best diner in central Connecticut is Athenian. Because it’s my local, because the staff are so friendly, and because of the chrome and pink neon.

The day that I took the photo of the dessert bar I was flying solo, ordering my favourite (a Greek salad, coffee), and reading a book. It was a little hard to concentrate on the words because two old timers were sitting at the counter, one a self-identified Republican, the other a self-identified Democrat. They were jabbing each other (and the Republican guy briefly scored some cheap shots against one of the waitresses who quickly tore him a new one) and I couldn’t help but overhear their conversation, punctuated as it was by long pauses and outlandish proclamations.

“We’re all Americans, we all hate the Taliban.”

“Hey, you saying that because I’m a Democrat I’m un-American?”

“This is a blue state, buddy.”

…back and forth, et cetera.