November 15, 2008 / Wondering whether this will make official content more accessible… 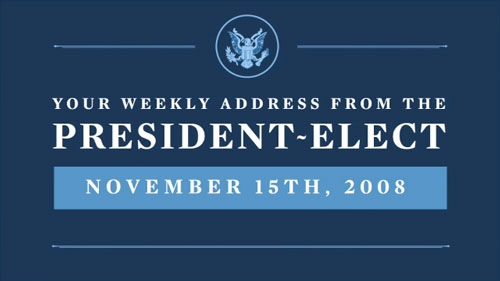 Obama’s first address is available from YouTube, et al., and as Quicktime, from change.gov

It was all over the news yesterday: the Washington Post is calling it the YouTube Presidency. When it comes to embracing the web as a medium of goverment the new administration is off to an ambitious start:

Throughout the Presidential Transition Project, this website will be your source for the latest news, events, and announcements so that you can follow the setting up of the Obama Administration. And just as this historic campaign was, from the beginning, about you—the transition process will offer you opportunities to participate in redefining our government.

In terms of web accessibility they are doing pretty well, though there’s room for improvement with the video. There’s no captioning (either open or closed) on the President-elect’s first web video address, but there’s a full transcript of it on the web site, and it looks like they’re doing this for all of it. Hopefully the producers will move towards closed captioning as a serious accessibility measure. The WCAG+Samurai guidelines, for example, note that a separate transcript, either in plain text, HTML, or some other format, is not a substitute for captioning or audio description. (Conforming with WCAG 2.0 will require captions, as well.)

Meanwhile, it looks like the equally ambitious Commitment to Accessibility is a good sign and will bring the U.S. in line with 136 other countries on the UN Convention on the Rights of Persons with Disabilities. This statement claims that change.gov itself is the first step in this direction, which shows how an organisation’s approach to the web can be viewed an indicator of its approach to the broader issue of accessibility:

The Obama Administration has a comprehensive agenda to empower individuals with disabilities in order to equalize opportunities for all Americans.

In addition to reclaiming America’s global leadership on this issue by becoming a signatory to—and having the Senate ratify—the UN Convention on the Rights of Persons with Disabilities, the plan has four parts, designed to provide lifelong supports and resources to Americans with disabilities. They are as follows:

First, provide Americans with disabilities with the educational opportunities they need to succeed.

Third, increase the employment rate of workers with disabilities.

And fourth, support independent, community-based living for Americans with disabilities.

This commitment to accessibility for all begins with this site and our efforts to ensure all functionality and all content is accessible to all Americans.

Also, I can’t resist mentioning that change.gov developers are using jQuery and Thickbox (both of which I use and love) for a small set of site behaviours, and it looks like they are taking progressive enhancement seriously: there is no JavaScript within the body of the page. They are even writing the Thickbox class names using unobtrusive techniques. The outgoing_links() function, for example, detects offsite links and, if you click on one, presents a Thickbox modal window to let you know that you are about to leave the site. They don’t add anything to the markup to trigger this, other than the external link itself. Regular expressions are used to determine that it’s an offsite reference.

While I’m geeking out on the site I might as well mention that the HTML is fairly lean, a lot of <div> tags but that’s about it. The number of HTTP requests is moderate, so it should load in a reasonable time for most visitors. Using CSS sprites for the menus could get this down a bit. You can get around the site okay in Lynx, too: 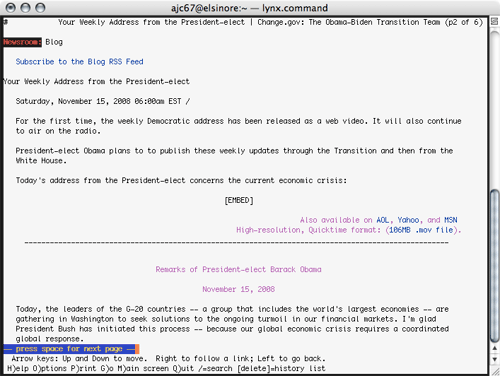 On a technical level I have to admit that I haven’t really looked at whitehouse.gov, which would be a logical point of comparison, but a brief inspection of the homepage shows that the body markup is littered with document.write in video playback scripts (ew), and uses the occasional table for layout (shudder). The government is required to make it’s own sites accessible because of Section 508, but the use of these two techniques strains the intention somewhat.

In contrast it’s the “music behind the words” of the commitment to accessibility that sets change.gov apart. The Transition Project web site isn’t perfect by any means (it doesn’t validate, lacks captioning on the video, and there’s the inexplicable use of a non-existent element called links† in the page body) but the developers are following design principles that make content access the first priority, and when it comes to your (future) government you have got to respect that.

Looking at the bigger picture here—the user experience and technical implementation of change.gov, the use of YouTube and the ongoing commitment to web video, the success of the Obama campaign online, the use of social web technolgies, the policy positions set forth, and the sheer amount of content being generated by the Transition Project—this is what Brian was talking about when he said that November 4 was a good day for the Internet. The new administration gets it.

This is great to see.

† What the? This is the second time in 24 hours: first <sarcasm> and now <links>. How many people are making up their own elements, and, more curiously, why?