January 25, 2006 / Maybe Australians need a third way of thinking about the meaning of January 26. 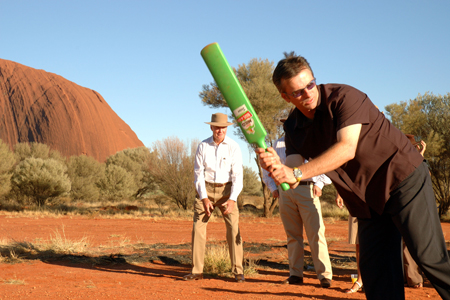 Switching temporarily to AEST I celebrated the national holiday this morning by sitting down to not one, but two, Vegemite-covered bagels while scrolling through my favourite newspaper. But as often happens, my initial curiosity led to a screenful of windows and a knot of tricky issues. Graham Ring’s heartfelt article, Australia Day: A Time for Home Truths inspired a lot of questions and the majority of what follows.

For most Aussies January 26 is “Australia Day;” it commemorates the landing of the First Fleet (from England) at Sydney Cove in 1788. It’s the national day, pure and simple. Beer, beaches and barbeques; t-shirts, flags and fireworks. (Last year it featured a spot of cricket in the central desert for former Australian Cricket Team captain Steve Waugh and Governor-General Michael Jeffrey, with Uluru keeping watch in the outfield.)

But since the early 1990s Australia Day has been pulled kicking and screaming into a symbolic struggle about whether it represents the settlement of Australia or the invasion of terra australis incognita and the unlawful dispossession of those who were there. The rival title for this event, which glowers like a heaving boxer in the opposing corner, is “Invasion Day.” Despite the animosity it signals, there are good reasons why some choose to use this name. In the article mentioned above, Graham Ring puts this into context by recalling Paul Keating’s famous Redfern Speech that marked the Australian launch of the International Year of the World’s Indigenous Peoples (in December, 1992). I’ve excerpted here a different part of the talk:

In truth, we cannot confidently say that we have succeeded as we would like to have succeeded if we have not managed to extend opportunity and care, dignity and hope to the indigenous people of Australia—the Aboriginal and Torres Strait Island people…

Redfern is a good place to contemplate these things.

Just a mile or two from the place where the first European settlers landed, in too many ways it tells us that their failure to bring much more than devastation and demoralisation to Aboriginal Australia continues to be our failure…

In Redfern it might be tempting to think that the reality Aboriginal Australians face is somehow contained here, and that the rest of us are insulated from it. But of course, while all the dilemmas may exist here, they are far from contained.

In some ways Keating’s point is as true now as it was then. Consider the dissolution, eight months ago, of the Aboriginal and Torres Strait Islander Commission (ATSIC), formerly Australia’s peak indigenous administrative and advocacy body. Two days ago the National Indigenous Times reported on the appointment of Assistant Treasurer Mal Brough as the new Minister for Indigenous Affairs (January 24). The article concluded on these two passages:

Mr. Brough has served in the Australian army and run a small business. He’s regarded as a conservative Liberal loyal to Howard and has no profile in Indigenous matters, nor is he known to have ever shown an active interest in the portfolio.

Brough may do fine in this role, or he may not. But his appointment is not a brassy endorsement of the Howard Government’s approach to Indigenous Affairs, which instead proceeds along the now well-worn tracks that have carried off the institutions of self-government from Indigenous Australians and delivered them into the hands of people whose commitment to and affinity with their sensitive inner workings is far from certain. Aborigines and Torres Strait Islanders will not see their interests represented in this appointee. Meanwhile, Indigenous Australians continue to suffer highly unacceptable outcomes on health and socio-economic indicators, along with the seemingly intransigent cultural and political problems that are the mostly unrecognised companions of this ultimate “poor status.”

It’s safe to say that thirteen years on from Keating’s speech, Redfern can still be a very difficult place from which to view the events of January 26 (in spite of the optimism he expressed that things could be turned around before the century ticked over).

Australia certainly still does have some shit to deal with. Last month’s racial conflicts in New South Wales were a definite sign that many people are not as relaxed and comfortable about their present or future as Prime Minister Howard once urged them to be. Images of rioters emitting streams of xenophobic invective while draped in Australian flags cannot be allowed to go unnoticed—they are a sign that something is wrong. Flag sales are at an historic high according to another story today in the Age. The terrorist attacks in the United States in 2001 and Bali in 2002 (in which event 89 Australians were killed), the success of exclusionary governmental policies and formerly obscure political parties, and the challenges to national events like Australia Day, are all plausible correlates of this trend.

In view of these concerns it is important to identify some conditions of possibility for change and renewal. Alongside news of our “spiking patriotism” Michael Leunig posts some kindly reflections on a sentiment that might unite Australians in common cause, A Picture of Innocence:

Innocent friendliness is a sentimental concept to some, yet surely it refers to a rare quality of openness that we sometimes dreamed had curiously emerged in this land. Surely the real living treasure of this country could be simple friendliness, however remnant and worn out by technology, modernity and political division it may seem to be. More than ever it seems priceless and worth remembering.

As an expatriate who has done a little travelling and a little living in other countries I can attest to Leunig’s optimism that friendliness is one of our finest qualities. It is never so much as when I get abused by some random stranger in a foreign country (and it’s happened in the United States, the United Kingdom, Sweden and Japan—the French let me off lightly but I wasn’t there long!) that I deeply miss the one I was born in. If we don’t forget the importance and uniqueness of that spontaneous love of others, and fight that it should be extended to everyone on our shores, without fear or favour, then we might have some decent ammunition to combat the darker side of our national character.

The other thing we need is to talk about these problems and to refuse to sweep them under the flag. We should all agree to recognise that progress is the reward of wilfully releasing the old and divisive meanings of our yearly commemorations, and also of the entrenched positions of critique and counter-offensive that rely on simple negation of the other point of view. Indigenous and non-indigenous Australians don’t just have friendliness in common: My suggestion, after reading a little Robert Hughes, is to rename January 26 “Surviving the British Day.” That’s casting the net pretty widely too since I think there are people on every continent who could sympathise with the sentiment, at least in historical terms. Lucky the Poms have a great sense of humour.

Okay, I’m stepping down from my soapbox. It’s time for a beer (there’s Vegemite but unfortunately no Four-ex in my fridge so foreign beer will have to do). End of sermon. Go forth and conversate!