Elena and the carousel

December 28, 2009 / Here we are, growing, as Lydia most aptly stated, “pensive and pensiver” about the state of the American mall. 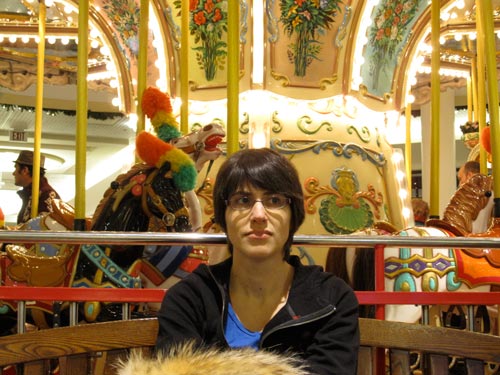 No. 1 (photo versions and details)

My awesome sister and her excellent fiancé visited for Christmas and we took them to the mall on, as we Australians like to say, “Boxing Day.” Let this be understood by my dear readers as a sign of our deep and abiding love for those two. Going to the mall the day before, or the day after Christmas is not our usual caper, but for those used to buying clothes on £, the American $ emits an irresistible siren call. 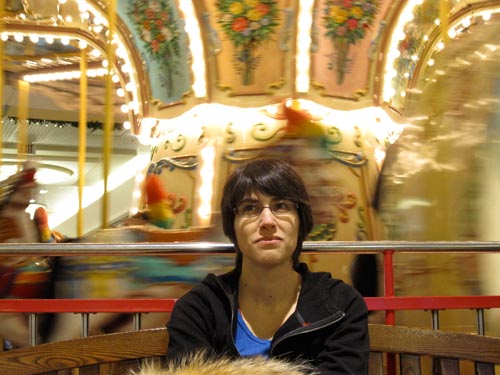 No. 2 (photo versions and details)

Elena was not completely enamoured of my photographic advances when I took these shots, and was fighting the urge to eat in the mall on account of being hungry and repulsed at the same time. But when the carousel started spinning behind her I couldn’t resist crouching in front of the passing throng to snap off a few more shots of my lady as she contemplated her predicament with mounting dread. 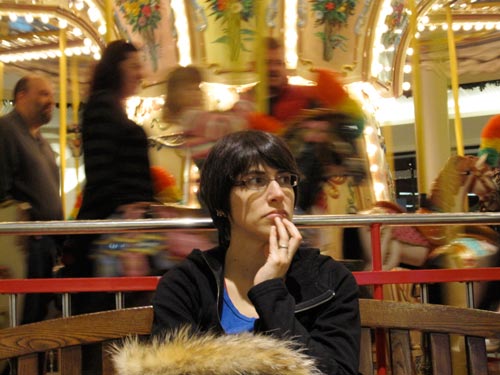 No. 3 (photo versions and details)

I’ve made more than my typical number of trips to consumer paradise recently, realising amongst other Important Things that Hollister and Aéropostale have completely taken over a certain chunk of the U.S. teen pre-frontal cortex.

But what surprised me most of all this time was the smell. It was horrific: a sordid amalgam of acrid Cinnabon cloud hanging over the carousel, gagging übermale cologne wafting out of Abercrombie in outrageous quantities, the sharp candy scent of various “autonomous mid-mall snacking units,” tendrils of Chanel No. 5 from JCPenney (least worst) and the unwelcome funk of occasional members of the General Public who somehow manage to represent Axe Body Spray Boy’s diametric opposite on the great wheel of masculine reek.

I’m marking it down: December 26, 2009—the day I finally understood, once and for all, Agent Smith’s aversion to the way we smell. It is completely out of control.