‘Doing the whites’ in kWh

December 27, 2010 / Results from a recent study show that people underestimate their energy consumption. Providing feedback through software could help to fix this. 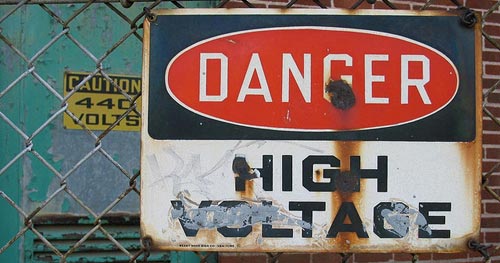 Metal signage near my house

Analysis of survey data in a study published this year shows that most people underestimate energy usage differences between household appliances, modes of transportation and recycling materials. The researchers speculate that the 100 watt light bulb example serves as an anchor point for thinking about energy usage, and that people make insufficient adjustments from this baseline when estimating the energy consumed by other things.

This graph from the paper summarizes the household appliance findings, which is where they focus the majority of their attention in the discussion: 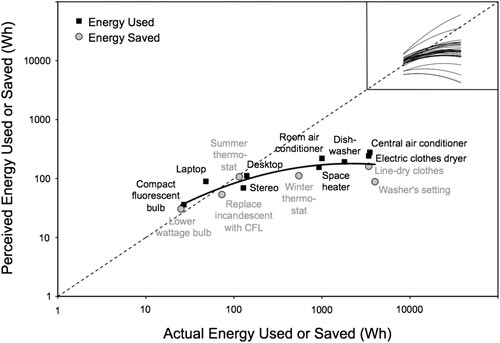 Perceived vs. actual energy used and saved by devices and alternatives.

All this got me thinking about what would motivate people to understand appliance power differences better, and adjust their appliance usage or purchasing behaviour accordingly. If you’re interested, like I was, to know more about the energy consumption of household appliances, Michael Bluejay’s site (I keep reading this as “Michael Bluth”) is a great place to start as he provides a good overview as well as a lot of up-to-date links to more specific information. But all this requires a fair bit of effort and just knowing that you may have your estimates wrong is scant incentive to learn how much it’s costing you to run the dishwasher several times a week, or to wash in warm water.

The authors of the paper say that, when asked how they could use less energy, survey respondents are more likely to think of curtailment behaviours (merely cutting back) rather than switching to more energy efficient devices, probably because the latter requires spending money now. It wasn’t clear to me at first why curtailment is considered much less effective than what amounts to buying more stuff, especially at a time when people are lucky just to have a job. One of the researchers explains elsewhere that curtailment is a problem of declining incentive over time: remembering to repeat the cutback activities versus buying appliances that are able to do the cutting back for you.

What about the “rebound effect?” I have read or listened to criticisms of efficiency recommendations that claim that if consumers adopt technologies that use less energy they will use those technologies more. As if on cue, one of the items that caught my eye on Bluejay’s site was mentioned in a comparison table: the very small energy consumption of LED night lights (0.5 W) compared with regular ones (5W). Thinking of the incandescent night light we use I checked out LED alternatives on Amazon, and the top reviewer for this popular product liked them so much he got one for every room.

Seems apt. But the reviewer didn’t mention that efficiency was important to him (though other reviewers do). One can think of reasons why this might have nothing to do with a “rebound.” Maybe he was looking for a light for every room and just liked these ones. Or maybe he chose energy-efficient LEDs because he wanted to use so many, rather than the other way around.

So is this effect real? Maybe, but it might not be big enough to worry about. According to Climate Progress, for example, evidence-based answers to this question are hard to find because of the many confounding factors in accounting for rebound behaviour. The aforelinked post describes an analysis of driver behavior in the US over the period 1966–2001, where better fuel economy was correlated with a modest increase in driving. But significantly, the authors report that the magnitude of the effect declines over time, and also with income level. It doesn’t take much to imagine that with the current economy being what it is, another oil price spike like 2008’s will suppress any rebound effect related to driving that compact car you got out of Cash for Clunkers.

Since the paper about how people estimate their energy consumption was framed as a problem of individual choices in daily life it makes sense to look at what would motivate people—not just assist them but actually drive them—to make better choices, possibly (or probably) by educating themselves as a means of saving money (i.e. where saving energy is not the focus). In the case of home appliances, if you are “merely” motivated to save energy then measuring your usage is a way to test what works and know for sure if you are using less power/saving money overall (despite whether some of your usage behaviours rebound a little).

By way of anecdote, my Dad’s car estimates for him what his range is based on his driving behaviour. Not only does he like this, he treats it as a game to see how far he can drive on a tank. The numbers go up and down in real time, and it’s easy to associate this feedback with efforts at control such as maintaining a constant speed, lower revs, and fewer hard stops. There is maybe a five second lag after a throttle change and the dashboard displays an updated number. Gasoline prices in Australia are not as high as those in Europe, but they are significantly above the US, and could be seen as glimpse at our future here.

I just read a fascinating article in Home Energy Magazine from 1993 on Bob Hubbard’s new-at-the-time, off-the-grid, PV-powered house in Arizona. At the time that he built this house, Hubbard worked in the solar energy industry, so he had a comprehensive understanding of how to build efficiency in, and designed the building to use about a tenth of the energy consumed by a typical American home: about 855 kWh compared to the regional average of 9,300 kWh.† (It’s big too, at 2,600 ft2.)

What became clear as I read the story was just how important it was that Hubbard was able to measure the effect of each of his appliances and systems, both at the planning stages and after he moved in: from assessing the baseload of the house when nothing was being actively used, to knowing which time of day was best to use power tools, and even to determining that the gas oven had a hidden power cost while it was running that was not covered in the manufacturer’s specifications.

All of this was possible because of the continuous monitoring and feedback of energy usage that Hubbard designed into his house. At the time it was built the entire residence was completely off-grid, and generated much more electricity than the two occupants used. The article suggests that if the house had instead been connected to the electricity grid his monthly bill from the utility company would have been about $7. Almost twenty years later, this is exactly the area where software could make a mark and help the general public to reduce their living costs.

Here’s an example of how real-time feedback makes a difference based on the writer’s experience with a “moment-of-use” monitor (in this case a PowerCost device):

A few minutes after one of my children started showering, the display unit jumped from its 3–400 watt idle value to over 1.5 kilowatts. […] I realized that was from the hot water heater turning on. When I hear the AC relay flip and the house begins to cool off, I watch the display unit jump to over 3kw. I found this type of monitor to be an effective way to begin understanding the systems in my home and how different behaviors affect how much energy we use.

This is a great example of the immediate usefulness of being able to receive feedback about your energy consumption, though it probably falls into the same camp as curtailment behaviours in that it takes a bout of motivation on behalf of the individual and is not easily sustainable even if you are a geek about it. The most well-known moment-of-use device is the Kill-A-Watt, which is affordable and easy to use, but only allows you to test devices that plug in to a wall socket. Even with the PowerCost which attaches at the breaker box, there is no data logging, so you have to be paying attention to the device to get any useful information out of it.

The web makes it awesome

It’s in web-based monitoring that the real leap forward lies: 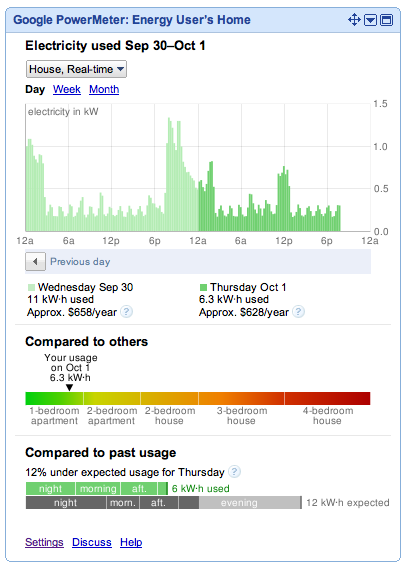 Currently this is available almost nowhere. Obviously (well, it seems obvious to me, but I could be wrong) this is awesome, but it won’t take off until it’s something you can order through your utility company, and ideally would allow integration of different energy sources (e.g. electricity, natural gas, user-uploaded data on wood, pellets, propane, etc.). However, the good news is that if you are super motivated you can get started on this right now by purchasing a compatible device, or—if you have mad phreaking skillz—by making your own using open source hardware and software.

Google PowerMeter is a Google.org project, and doesn’t cost anything. (I’m not saying that there is therefore “no cost.” There are privacy implications, though from what I have read the status of this product means that Google is not intending to try to make money out of it, directly at least.) What it does do is makes it trivial to include energy monitoring in your life the same way that you check your bank balance online. And it allows you to represent the data in different ways and compare your usage history with data from the general population.

I suppose this is what people who use the term “smart grid” are talking about, or maybe the idea of combining something like this with appliance-level communication within the home, which—provided it can all be done without using too much power—would make it much easier than it currently is to (a) have a clue, and (b) care about how much energy you consume, in the home and beyond.