August 30, 2009 / The fightin’ NIC, and the awesome-sounding “International Ice Patrol.” 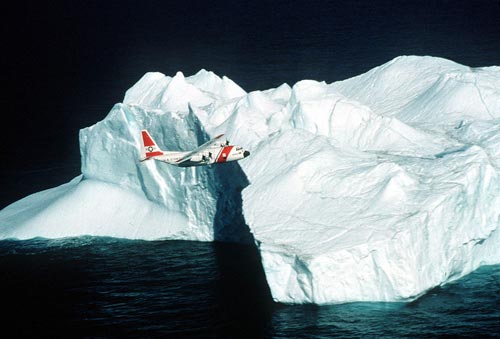 A circuitous route through The Great Wiki this afternoon—on the couch, with Elena—revealed the existence, heretofore unbeknownst to us, of the National Ice Center (under Independent Agencies). It’s mission is something about “navigational ice analyses” for various government agencies and the Department of Defense. Interesting… Further research turned up the following historical note (emphases mine):

Ever since the RMS Titanic disaster in 1912, the Coast Guard has operated the International Ice Patrol to track icebergs in the eastern North Atlantic. The Ice Center supports this effort and other operational missions by evaluating a variety of national imagery. Similarly, although it is not an official mission, NIC has been tracking icebergs in the Antarctic region for 24 years. Last year the movement of a 24 by 48 nm iceberg into the shipping lanes south of Argentina caused sufficient danger to ships and submarines that many had to be diverted from their planned courses.

International Ice Patrol? Coast Guard? Since the Titanic? So James Bond, circa 1975. They have cool badges and stuff, and the planes have a LEGO-service vehicle-quality to them that I totally respect. These days it looks as though the National Ice Center has icebergs covered from pole to pole.† Good thing that the Great Wiki has more to say about this:

Quinnehtukqut and UCONN reprazent! Going back to the original list I discovered that the International Ice Patrol is now part of the Department of Homeland Security. Probably just what happened to the Coast Guard when the new über-agency was formed, but I guess there’s also the fact that “navigational ice” is becoming a big deal these days, what with all the melting. So, there it is, readers—your entrée to a little-known, tactically important and totally legit government agency, replete with awesome photography, right here in the Nutmeg State. You’re very welcome.

† Significant restraint was exercised in the authoring of this column in order to avoid making reference to eighties pop icon Vanilla Ice, diamonds and meth-amphetamine.