Movie Night at the Big House

April 10, 2006 / As sociological phenomena, the existence of sexual double-standards is by now fairly uncontroversial. By this I mean that the pre-supposition, as a matter of fact, that some groups of people are more often exposed to prejudice as a result of their gender and/or sexuality than others, is not generally met with fanatical resistance in public discourse. 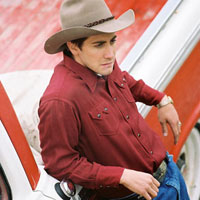 As sociological phenomena, the existence of sexual double-standards is by now fairly uncontroversial. By this I mean that the pre-supposition, as a matter of fact, that some groups of people are more often exposed to prejudice as a result of their gender and/or sexuality than others, is not generally met with fanatical resistance in public discourse. In fact, since the 1960s it has become increasingly necessary not to overtly resist this “finding” about modern life, if not to actually engage in equal treatment of people of all sexualities. Perhaps as a result of being driven underground in direct language homophobia often emerges in unexpected ways. I have a specific example in mind today, courtesy of the BBC, “US Prison Bans Gay Cowboy Movie” (BBC, April 10, 2006):

A US prison officer is to be disciplined for showing the gay cowboy movie Brokeback Mountain to inmates. Correctional authorities in Massachusetts said the film was unsuitable for a prison setting because of its “sexually explicit scenes”.

The Massachusetts Department of Correction is to sanction one of its officers for showing Brokeback Mountain to prison inmates. So what? Why is this international news? To save you the suspense of wondering what I think, my answer can basically be boiled down to two words: “liberal homophobia.” But I had better explain…

In Australia I worked for several years as an administrative assistant for the Queensland Department of Corrective Services. I worked part-time in an office inside several prisons, but never on a cell block. Since I spent most of my time in the office, I do not claim to have first-hand knowledge of inmates’ daily lives. But I did hear things. As I recall one of the cardinal rules of managing prisoners’ leisure activities was never to show movies depicting sex or nudity. I’m not saying that this didn’t happen. All I’m saying is that everyone was aware that it wasn’t supposed to, and therefore that infringing such a rule and getting caught would almost certainly get you—the employee—punished. Prison administrators’ legitimacy depends on strict adherence to such rules, and therefore on taking action against those of their agents who have been observed to contravene them.

Now prisons, it must be said, present an enormous problem when it comes to regulating sexual behaviour. This problem manifests on the inside, where both sexual “deviance” and sexual violence are relatively institutionalised, and on the outside, where sexual crimes and sexual “scandals” can severely impact governmental legitimacy. The grand poobah of all sexuality fears is that of the sociopathic repeat sexual offender (especially one who targets children) and it is because of this figure that many a “lock ’em up and throw away the key” law has been proposed and implemented (in Australia it’s still called, if you can believe it, being “detained at Her Majesty’s pleasure”). But although pædophilia may crown the hierarchy of anxieties, fear of homosexuality is a more pervasive force. In the societal imaginary prisons stand at the borderline between right and wrong behaviour; between the well-functioning and the sick. They also happen to be a place where choice of sexual partners—where it exists—is limited to those of the same gender.

But there are prisons and then there are prisons. Some correctional facilities are more like open-plan farms with mostly symbolic barriers—the last step, taken in good faith, before an inmate is granted community release; others are designed to restrict physical movement to a granular degree, and to monitor every interaction the incarcerated party has with his or her environment. In their story the BBC enlightened us as to the scale of the facility in question, a portion of whose inmates saw Brokeback Mountain, (i.e. very large) but not to its security level. The jail in question is called MCI-Norfolk. It is a medium security (“Level Four”) prison of a particular kind—a high security perimeter with low internal “movement control.” This is the kind of prison in which I spent the most time during the course of my employment. It is typically where inmates who are doing long sentences for serious crimes (those of a violent or sexual nature, or drug-related crimes) serve out the latter part of their sentences.

Here’s the official word on MCI-Norfolk, from the Massachusetts Department of Correction:

MCI-Norfolk is the largest facility of its type in the Commonwealth of Massachusetts. Eighty-percent of the inmate population at the facility is serving time for violent crimes. Of that eighty-percent, approximately 275 inmates are serving life sentences for commission of murder in the first or second degree. The next largest crime category is armed robbery, followed by sex offenders.

Not a maximum security facility, sure, but certainly not the kind of place where you want to wax philosophical on questions of appropriate conduct. Showing sex scenes to sex offenders, bank robbers and murderers is a grey area that no government with an interest in retaining office will want to mess with. (Just so you know.) Sailing past such issues the BBC story rather blithely implies the obviousness with which the Massachusetts Corrections Department should have to defend its punishment of the officer who showed the movie in contravention of policy. Brokeback Mountain was, after all, a brilliant, moving and important piece of cinema. (Which should have won best film.) Nevertheless, sex it contained. A statement by a spokesperson for the Department denies that the officer’s transgression was in allowing inmates to watch a homosexual story, but rather for allowing them to view certain sexually explicit scenes.

From the BBC story again:

“It was not the subject matter,” said Diane Wiffin, of the Massachusetts Department of Correction. “It was the graphic nature of sexually explicit scenes.” She said the decision was not related to the critically-acclaimed film’s plot involving a gay love affair.

The terms of “appropriateness” in which the BBC’s story is couched nevertheless beg the question of how the Department was supposed to respond. Would it have been possible to defend a failure to punish its officer on the grounds that Brokeback Mountain was a critically acclaimed drama about the destructive struggle to overcome homophobia? Though some members of the public would certainly be sympathetic to this view of the movie, it presents a consistency problem when films with heterosexual themes are denied to prisoners because of the sex scenes they contain. Here, I think, the double-standard in reporting is nowhere more evident: the BBC would not have elevated the story to their front page if the film had not been about homosexuality, probably even if said film had won an Academy Award, and not as “world news” surely. (It’s interesting to speculate whether the story might have unfolded differently had it involved one of the high-profile films of years past—1999’s American Beauty or 1969’s Midnight Cowboy would make for some interesting counter-factual examples.)

So okay, it’s a double-standard, some readers may be inclined to agree—it’s news because the movie is about homosexuality (and would not be if it wasn’t). But liberal homophobia? Please explain?

In my view this is where the BBC story comes closest to putting cynicism before reportáge. One wonders: if this would not be news under heterosexual circumstances, what makes it a front page story given that it’s a queer tale? Basically because it appeals to a negative fascination with sexual policing—it’s a movie about gay cowboys in a “furore” surrounding male prisoners. In other words, it will appeal to the not-so-better angels of the liberal audience’s nature. “Everyone knows” that doing prison time involves a grave sexual risk, to both men and women alike. I mean, with the whole soap-in-the-shower thing, it’s practically folklore. Moreover, identifying with a gay cowboy is, after Brokeback Mountain, no easy proposition (nor was it before). There’s serious risk there too, and not only on the movie’s own dramatic terms. Witness the overwhelming desire to take the piss (hilarious though such interventions are).

The BBC may be a conservative institution, but it is a relatively liberal (in American terms) news outlet. U.S. “social” conservatives stumbling across this story could well be expected to respond to news of the correctional officer’s punishment with a simple, “Yeah, well good.” But there’s no doubt in my mind that this piece was intended to appeal to liberal sensibilities likely to be put off by the retrospective censoring of a great movie. Yet the story derived all of its caché from the titillation expected of a clash of “deviant” and highly caricatured male sexualities—basically from what happens when gay ranch studs meet prison bitches. Whence the homophobia. (I hold to this interpretation despite the fact that the story appears next to other Brokeback links about the movie’s recent history of censorship, mainly because I detect a blinding lack of reflection in the BBC’s ongoing coverage about their own selection process, silences and omissions.)

As a news source I like the BBC. I get most of my news online and I think it generally sets a very high standard for Internet-based news media. (I’m also an occasional viewer of the morning newscast on BBC America.) Overall they do a pretty good job for what is basically a globe-spanning television news format. I’m also not particularly surprised by the appearance of the Brokeback prison story there. But I did feel the need to call it for what I saw it as: a double-standard rooted in fear of sexual difference and encoded as trivial entertainment. Not that this is the first such encounter for Brokeback Mountain by any means, and it certainly won’t be the last.