February 7, 2006 / What does it take to stay at the cutting edge of the disposable razor game? (And to which news source would you turn for answers?) The Onion featured this editorial two years ago, proving perhaps that even when you try, you really can't make this shit up… 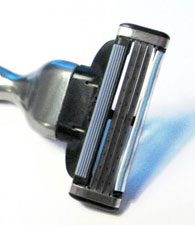 What does it take to stay at the cutting edge of the disposable razor game? The answer may be deceptively simple: add more metal and then run an electrical current through it. Two years ago The Onion featured an editorial by Gillette boss James Kilts, providing a rare insight into the industry heavy-weight’s strategic thinking, and proving that even when you try, you can’t make this shit up:

What part of this don’t you understand? If two blades is good, and three blades is better, obviously five blades would make us the best fucking razor that ever existed. Comprende? We didn’t claw our way to the top of the razor game by clinging to the two-blade industry standard. We got here by taking chances. Well, five blades is the biggest chance of all.

Yes, that’s right: five blades. And the product, called Fusion, hit the shelves this month. Progressive males throughout the free world can now scrape 2.5 times more metal across their faces per stroke than their two-blade carrying counterparts. The move should not surprise students of advertising. The immutable law of razor marketing clearly states that for every additional blade on a disposable razor, its wielder enjoys a one-unit increase in machismo. This innovation alone is enough to make Gillette’s new product 1.25 times more masculine than industry rival Schick’s formidable “Quattro” razor (even before taking the Fusion’s sixth “trimming blade”—on the back of the device—into account). From MSNBC in September:

Some had expected Gillette to bring out a four-bladed razor, perhaps a self-lubricating one. Instead, it jumped to five blades, or six including the trimmer, and will sell Fusion-branded shaving gels and after shave balm. “There was never a plan to go to four,” said Peter Hoffman, president of Gillette’s blades and razors business, who said Fusion was in the development pipeline for several years.

“Four would have just been gay,” he added. “Schick’s ‘Quattro’ has four blades and starts with a ‘Q’ (like Queer). The Fusion is obviously more masculine. And it’s not named after a German car. It also starts with an ‘F’ like ‘five’ does. It’s freaking awesome,” Hoffman concluded (well, in my imagination he did). Not to be outdone by his shaving VP, Gillette’s boss came back with another chunk of iron logic from the company’s rich automotive repertoire:

“The Schick launch has nothing to do with this, it’s like comparing a Ferrari to a Volkswagen as far as we’re concerned,” Chairman, President and Chief Executive James Kilts, told Reuters.

But perhaps the final word should go to Australian marketing visionaries the D-Generation (whose manifesto was later popularised by Tony Martin and Mick Molloy on their Brown Album if I remember rightly), who realised what the time was in the razor game long before fellas in the rest of the industry were casting a five o’clock shadow. For all the fast cars and pulsating power the missing ingredient has always been a dash of law enforcement action:

The first blade distracts the hair, while the second and third blades sneak up behind it, cutting off any escape routes. The fourth and fifth blades attempt to coax the hair from its hiding place using modern counselling techniques while the sixth blade, posing as a passing motorist, acts as a decoy, allowing the seventh and eighth blades to swoop down and quickly overpower the hair. The ninth blade, disguised as a postman, administers a small dose of chloroform, allowing blades 10 through 13 to remove the hair and escort it away for further questioning. The 14th blade informs the hair of its rights. The 15th blade handles the paperwork and the 16th blade, well, it’s just along for the ride.

For my money though, less is still more when it comes to multi-blade shaving and I’m sticking with the two-blade industry standard for now. Critics might argue that maybe this is why I ended up staying in school until grade 23 instead of getting a real job, and why I’m still not all that interested in sports. But at least I drive an American car.