January 16, 2006 / I wonder what it was like to belong to one of the privileged research units (probably mostly in engineering and the sciences) whose office was populated by a dozen or so of these now-classic little beige boxes, blipping electrons at each other over the copper phone lines that comprised the “Phonenet" campus network. 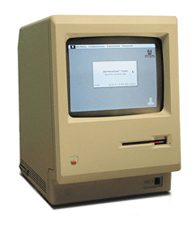 Somewhere, somehow (probably through a popular Search Engine) I stumbled across an interesting article on the design of Yale’s campus data network. I saved it amongst my bookmarks and, for reasons best explained by philsophers, psychoanalysts or (at a stretch) biochemists, I decided to read it today. The article was written ten years ago to the month, and contains this gem of computing history, The Design of Yale’s Campus Network:

Most computer users at Yale in the late 80s used Macs.

Those were the days! The mid-eighties saw the rise of the Mac beginning with the now-famous Macintosh 128K, pictured here, in 1984. This machine helped to usher in the era of personal computing as we know it through it’s pioneering implementation of the GUI. In the words of MacTracker creator Ian Page:

Released with much fanfare in January of 1984, the Macintosh was the first affordable* computer to include a Graphical User Interface. It was built around the new Motorola 68000 chip, which was significantly faster than previous processors, running at 8 MHz. The Mac came in a small beige case with a black and white monitor built in. It came with a keyboard and mouse, and had a floppy drive that took 400k [kilobyte] 3.5” disks—the first personal computer to do so. It originally sold for $2,495 U.S. [* If US $4,600—adjusted for inflation using the CPI—is affordable.]

I wonder what it was like to belong to one of the privileged research units (probably mostly in engineering and the sciences) whose office was populated by a dozen or so of these now-classic little beige boxes, blipping electrons at each other over the copper phone lines that comprised the “Phonenet” campus network.

For the last two-and-a-half years I have been the part-time “Local Tier 1” support person for my department (the Department of Sociology). On the ground this position title is, of course, known to approximately two people (me and the Business Manager). To everyone else I was the “computer guy.” As Computer Guy (I got the job because I was interested and because I knew how to open and close Word documents on both a Windows PC and a Mac) I learned my job whenever someone had a problem, or whenever new equipment had to be added to the network and made ready for use.

In all this time I had the pleasure of working on three Macs: my own (originally an iBook named Moses, upgraded last May to a PowerBook called Abraham), an ex-faculty PowerMac G4-turned-web-development-machine (Jacob), and the PowerBook belonging to a current faculty member (name withheld). Suffice to say that we are now a far cry from the heady days when “most computer users at Yale used Macs.” Twenty years on, most computer users at Yale have made Michael Dell a slightly-more-incredibly-wealthy person. (Interestingly, Dell founded Dell the same year the 128K made it’s debut, at least according to his soporific company web page.)

I actually like working with PCs. My first experience with computers was with PCs, not Macs, in large part because the cost of a new Mac exceeded what my parents were willing to pay for our family’s first computer (a Samsung 386 SX running at 16 MHz, with a 40 MB hard drive), but also because your chances of being exposed to a Mac in Brisbane in the early 90s were probably small unless someone you knew went to university or worked at one. Cost also kept me away from Macs until I moved to the U.S. in 2002, whereupon I sold my first car (a lovingly cared-for green ’78 Honda Accord) to my brother in July and bought Moses a month later in New York City.

To those who know me (and my computer) I should qualify the above statement by adding that there are definitely things that I don’t like about PCs, and about which I have been known to complain incessantly from time to time. But the point is simply to reflect on what my part-time job at Yale might have been like if it had existed in the late-1980s (or conversely, if everyone at Yale used Macs today). I suspect that in the former scenario I would have acquired much less transposable knowledge than in the latter one—as the above-mentioned ITS article explains, Phonenet was designed to facilitate the emerging Appletalk network protocol. Subsequent system upgrades (for example the move to campus-wide Ethernet) also corresponded in a profusion of network technologies, and no doubt a decline in the ratio of talking Apples!

In contrast to the Mac ’80s, and the PC ’90s, the “Universal ’00s” are seeing a high level of Mac-Windows integration, to filch a term from the web site of the same name. Apple’s move from the wholly proprietary OS 9 to the UNIX-based OS X has done a lot to further such convergence. Additionally, both Microsoft’s and Apple’s implementations of LDAP directory services (Microsoft’s Active Directory and Apple’s Open Directory) are structurally and functionally integrated enough that OS X clients can authenticate on Microsoft-managed network environments and Windows XP and 2000 clients can do the same on Apple-managed networks.

(While I don’t think Apple-managed networks are particularly common at Yale, a department or research center that wanted to implement one would be able to do so. And from what I understand of such configurations, a reasonable familiarity with one product—say, Windows Server—would provide the system administrator/network architect with a decent head-start on the other—in this case OS X Server.)

From my point of view as Mr. “Local Tier 1” the Yale network was a beast that simply opened up its gigantic maw to admit any kind of client computer with casual ease—whatever the faculty member for whom it was purchased had preferred—although the network is ultimately controlled by some heaving Windows boxes at the very highest levels. Instead of an elaborately structured and hierarchicalised collection of centrally-authenticated network devices, the casual observer, strolling around the department, might simply notice that over here some people are using PCs, and over there—well, that professor has a very handsome computer indeed.

I stepped down from my Computer Guy job last week and will miss the freedom it gave me to tinker around the edges of the amazing and complex structure that is the Yale computer network. For me it opened up a fascinating window (sorry, “aperture”) into the world of computers that I have no hope of closing any time soon. Who knows, maybe I’ll put the sociology Ph.D. on hold for a while and become a full-time Computer Guy? Stranger things have happened, and as my dad says, “You never know your luck in the big city George!” (Why he calls me George is a whole other story.)