May 12, 2006 / Ze Frank, who has had a loyal web following for quite some time, began a video blog this year entitled The Show… 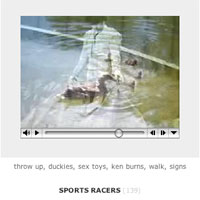 Ze Frank, who has had a loyal web following for quite some time, began a video blog this year entitled The Show with Zefrank. The Show is a short round-up of the day’s headlines from Ze’s perspective — keeping the Sports Racers up-to-speed on the state “Knowledge”—interspersed with random observations about ducks, people and public signage. Tuesday’s Show (May 9) is a corker in which he zooms in on a duck while confessing his admiration for the Ken Burns Effect, and then goes on to describe the enhancements that would be included with the “Ze Frank Effect.”

The Show looks deliciously indie, appearing to be shot with modest video equipment and then cut together in a fast-paced style that highlights Ze’s rapid-fire humour. Perhaps you could call the resulting theatre “Internet of the Absurd?” According to the Great Wiki Ze Frank is based in Brooklyn but most of the shows from May were filmed in Europe. Nevertheless he keeps his sights on the heartland. The best line from today’s show? At the sound of the tone you will trust me… And I will keep you safe. He’s also a Magritte fan. “Ceci n’est pas une pipe.” Or maybe it’s Machiavelli he likes. Or David Mamet. Or Freud. (But not the pipe.)

Update, May 15: Since it’s not that easy to find,† and since it should be found, here is the link to the first episode of The Show which went live on Friday, March 17th, 2006. That means, Sports Racers, that the show is just shy of its two-month birthday. Let’s hope Ze got back without any further troubles.

† Well, it’s not that hard to find, you just have to keep pressing the previous episode navigation link on Ze’s site until you can’t go back any further, rather than going there directly. But now you can (because Knowledge likes to start at the beginning).